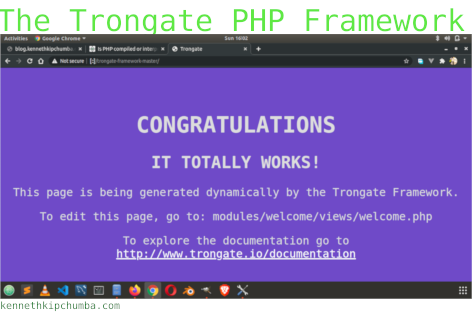 The Trongate PHP Framework tipped to be released to the public soon is at its final stages. Web developers who will opt to use it may end up with the power and speed to build complex web applications for their clients. It is something that a web developer would need without the overheads that other frameworks seem to pack into their codebase.

Going by his words, the Trongate framework will remain to be version 1 forever relieving its developers from code rewrites. Framework rewrites can sometimes bring hell to developers using a particular framework especially due to breaking changes. This is because of code rewrite that would subsequently take place to the older software using the previous version of the framework. Take for instance a developer developing out some software using version 1 of a framework, when the particular framework receives another version say, version 2, in due time developers who had written their software using version 1 may have to brace up for partial or in the worst-case scenario rewrite their entire code using the new version of the framework. Trongate PHP framework promises to address this problem.

Technology being a fast-paced industry in the globe,  Web Development is literally mind-blowing with new technologies, new re-writes of old technologies and new frameworks all of which a developer must keep up with in order to stay ahead of the game.

These Trongate videos are great, the dekstop app approach to building new sites looks to be revolutionary and certainly a game changer, imagine sitting with a client fleshing out the ideas for your database and building it there and then and having an API thats ready to go once you've done entering all the fields you want. Then just have a look around the module market place, grab the modules you want, and start putting together and incredible app. All the time consuming pieces are blitzed in no time, and you have time to spend on the finer details/business logic, stuff that usually would suffer in this day and age of MVP. It's got to be a winner, if this lives up to its promise theres going to be a lot of attention and a lot of worried faces when people realise their over engineered methodolgies and practices which deliver nothing to the client but waste their time and money and give web dev a bad rep, have been exposed and clients will start wishing they had gone down the trongate route! This will be a great skill to have!

Claims of being significantly faster than every popular framework with no actual evidence to back this up. Begging for stars on GitHub. No real documentation but a paid course that's "like no other". Clearly this dude is full of shit.